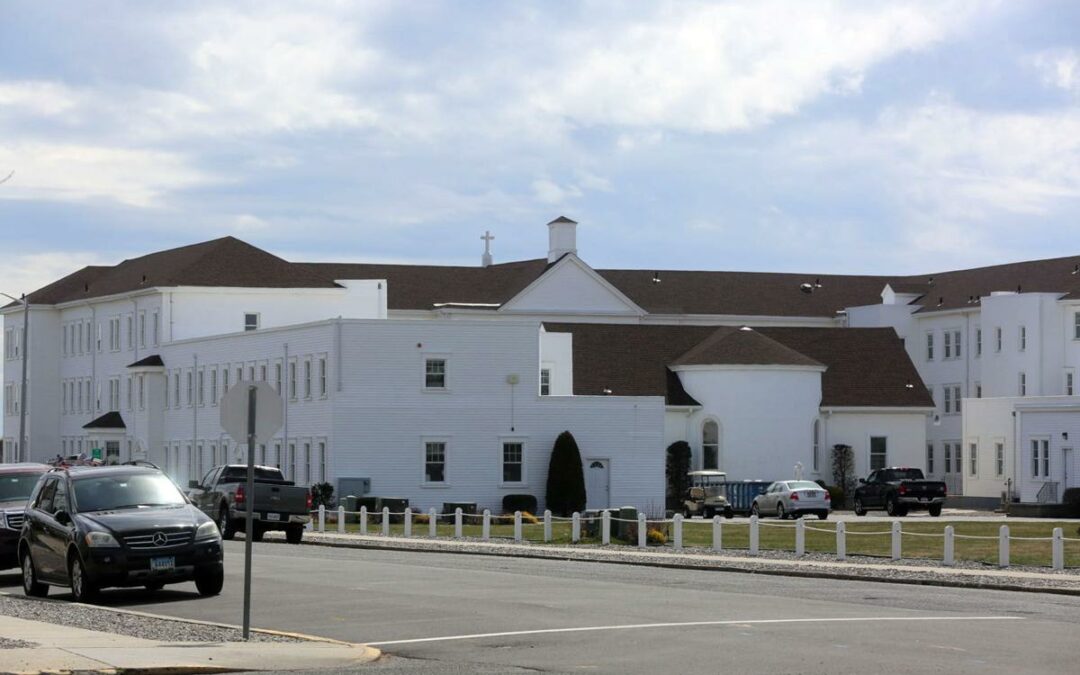 (Article from the Cape May County Herald)

STONE HARBOR – A Stone Harbor Zoning Board meeting Dec. 7 was the setting for the Sisters of the Immaculate Heart of Mary to make public the details of their plan for the Villa Maria by the Sea site, on 111th Street, in Stone Harbor.

The three-story, 250-bed, summer-only retreat house that graced Stone Harbor since 1937 is to be demolished and replaced by a smaller, year-round retreat house and a 13-lot residential subdivision.

As Sister James Dolores, the property’s manager, told board members, the diminishing number of sisters and their rising average age necessitated a new smaller nun’s retreat house that could be used at any time of the year.

While the new building the sisters wish to build on the site requires some zoning variances, planners for the order of nuns argued that the proposal would result in a structure more compliant with borough zoning codes than the large hotel-like building that occupies the space. The present building was constructed before the borough enacted any zoning ordinances.

The 13-lot residential subdivision was presented as a portion of the plan in total conformity with zoning regulations. Only the new retreat house, with its chapel, required special consideration in a residential zone.

The smaller retreat house would change the occupancy from 250 beds to 52, with a chapel accommodating 50 seats instead of 150. All functions would be part of a single structure, with no need for outbuildings. The new retreat house would have a heating system, allowing it to be used outside of  summer.

Sister James explained that nuns of the order come to the retreat house for 10-day stays, for prayer and meditation, including two days of vacation. She said there would be no commercial use of the property.

The retreat house’s chapel and restaurant would be used only by the sisters in attendance. There would be no public use of the facility.

The design calls for no loss of street parking, something planners knew would be a concern in the parking-challenged borough.

The creation of the residential subdivision and the sale of the 13 lots, all of which would have easy access to the beach, is intended to provide the funding for the demolition of the existing building, the construction of the new retreat house, and an endowment that could provide future income for maintaining the property.

The Zoning Board gave approval for the site plan (https://bit.ly/341p1CW), with the variances required subject to various conditions.

A paper street, First Avenue, which serves as the existing building’s front lawn, must be vacated by the borough for the plan to advance. There is no expected opposition to that action by Stone Harbor Borough Council.

Any requirements of the state Department of Environmental Protection would also have to be met.

The planning for a smaller modern retreat house combined with the sale of land for a “code compliant” residential development is the outgrowth of a planning process begun in 2016.

The existing building, limited to summer use by its lack of heat,expensive maintenance, and requiring daily upkeep beyond the capabilities of a reduced and older order of sisters, has come to the end of its 83 years of occupancy.

An added advantage is the proposal’s plan for elevating the property so that the lots to be sold would be on a street already elevated to meet flood requirements.

The application (https://bit.ly/2JP37fb) to the Zoning Board also notes that “in order to preserve the natural environment, no development whatsoever is proposed in or about the dunes and beach area from First Avenue (to be partially vacated) to the Ocean, an area composed of 2.01 acres. Public beach access to the Beach and Ocean is not only provided but design-encouraged.”

Sister James explained that the new structure would serve as a convent for four sisters who would live there year-round to maintain the retreat house.

For more information on the plan, visithttps://bit.ly/33YuE4C.