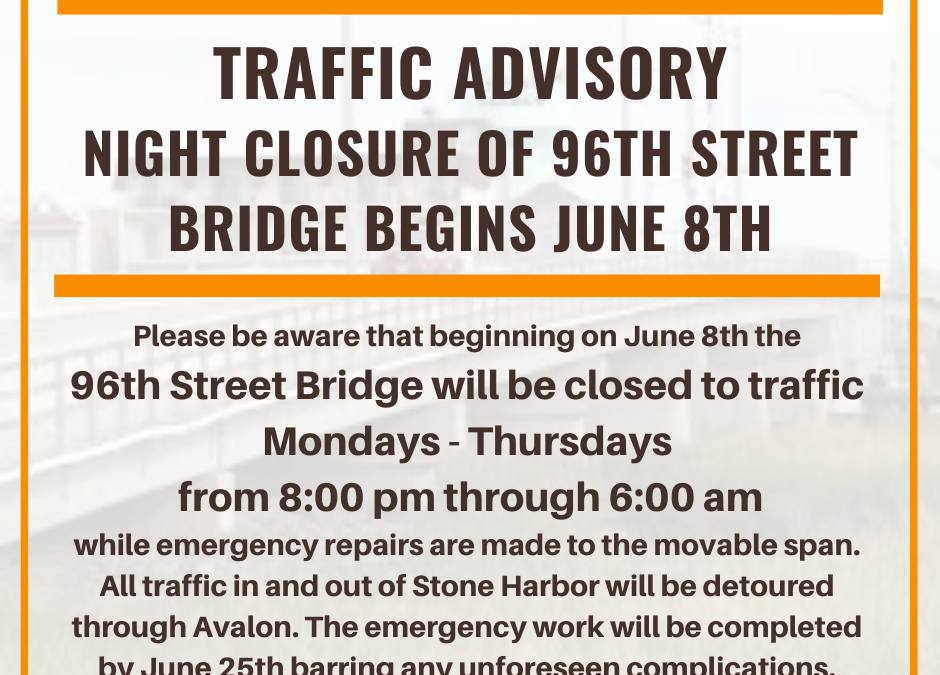 Per the Office of the County Engineer, Robert Church

STONE HARBOR, NJ — The 96th  Street Bridge along Stone Harbor Boulevard leading into the Borough of Stone Harbor will be undergoing emergency repairs to the bascule span (movable span) during nighttime hours beginning on Monday, June 8.  Work will proceed Monday through Thursday nights between 8:00 pm to 6:00 am.  Due to the nature of the work, the bridge cannot remain open as work proceeds. Thru traffic wishing to access Stone Harbor via Stone Harbor Boulevard will be detoured during these work times with access to Stone Harbor directed to Avalon Boulevard.

Local traffic wishing to access businesses and residences up to the west side of the bridge will be permitted to proceed along Stone Harbor Boulevard. The bridge will re-open at 6:00 am each workday and remain opened until 8:00 pm that night.  There are no anticipated closures on Fridays through Sundays during the construction phase.  The contractor anticipates that the emergency work will be completed by June 25  barring any unforeseen complications.

Traffic heading north on the Garden State Parkway wishing to access Stone Harbor at exit 10 will be redirected to proceed north on the Parkway to exit 13 and proceed east on Avalon Boulevard (C.R. 601) to Ocean Drive (C.R. 619). Traffic will then be directed south along Ocean Drive to Stone Harbor.

The proposed work was prompted by the deflection of the southwest bascule girder cover plate due to pack rust build up. An analysis has revealed that the bridge capacity was not substantially impacted. However, the cover plate is situated  at a critical location over the trunnion shaft which has  prompted the initial need for repairs. Similar repairs to the remaining 3 bascule girder/ trunnion locations will also occur during this emergency work phase, as these locations have experienced similar, but less severe deterioration.

Through the process of designing the bascule girder repair, significant emerging deterioration of several stringers, gusset plates, diagonal bracing floor members and floor beams was observed. In addition, Floor Beam 3 will be rehabilitated by the addition of sistering plates and angles in order to address small cracks that had developed in the beam about 4 years ago. The migration of those cracks has been mitigated through the drilling of arresting holes, however the planned repair is intended to eliminate the occurrence of further crack migration by strengthening the member. Continued deterioration of some steel members has compromised the steel and  has accelerated the need to make these interim repairs. As a result, this emergency contract will also include interim repairs to selected steel framing members in addition to the bascule girder repairs.

Over the past two years, the County has taken proactive steps in order to improve the electrical operations of the bridge as well as reduce impact conditions on the nearly 80 year old bascule span.  These measures have included attempts to reduce the speed of vehicles approaching from the west through stepped up speed enforcement, the addition of radar feedback signs, and greater pedestrian awareness.

Regrettably, these measures have resulted in only marginal decreases in the travelling speeds. Therefore, the County will be installing (3) raised pavement speed tables along Stone Harbor Boulevard just west of the bridge in order to reduce traffic speeds. The incorporation of the speed tables will reduce impacts and vibrations onto the bridge and promote enhanced pedestrian safety. The construction of the speed tables will proceed during the scheduled bridge closures in June in order to reduce the inconvenience to the traveling public.